The review came from here http://ofanimeandvideogames.com/gantz-manga-and-anime-review-for-a-perfect-combo/

Since the manga for Gantz is probably coming to an end in two chapters, I have decided to do a review for a series I have surprisingly come to like.  Normally I am not fond of sitting down and reading 200 or more chapters of an ongoing manga but after seeing the surprisingly short anime of Gantz, I wanted to know what happened next.
The story of Gantz starts off with a perverted ass hole named Kurono.  Kurono is by no means you’re happy or determined typical protagonist, he clearly has no redeeming qualities about him or any goals for that matter.  He seems standoffish and ready to bite anybody’s head off.  When he and his friend Kato is ran over by a train in the subway, after saving a drunk bum is when the the story takes off.

Yes, all of these rules come into play.  Gantz is full of a variety of characters and personalities and it is interesting to see who spends their 100 points on what.  Sadly-well depending on who dies- some characters never reach a hundred points; dieing in the game permanently.

Not for the Feint of Heart

Watching the first few minutes of the anime and reading a few pages of the manga will tell anyone that Gantz does not shy away from full descriptive frontal nudity and  highly detailed gore.  Pin up drawings of Gantz female characters are on each starting chapter page for a long while (although I wonder what made the artist do a male pinup here all of a sudden), and there is enough blood spilled to fill a nation of starved vampires.   I find it funny that the Gantz manga censored male frontal nudity for a while but later started showing male frontal nudity without any forms of censorship later on.  This is a warning for those who like to read manga or watch anime in front of people who might have an issue with huge amounts of nudity or gore.

Gantz is not work safe in the slightest 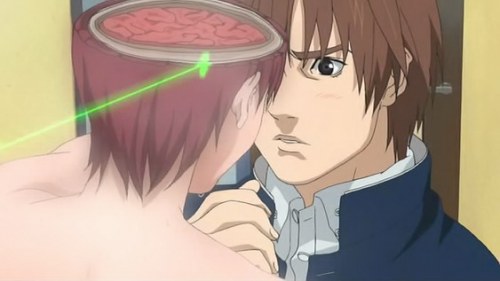 I love how each Gantz game introduces new contestants with different personalities.  The contestants range from students, helpless grandmas, yakuza members, and even a dog and later a panda.  Some contestants are excited to run into the Gantz games and kill with pleasure and others try to hide from the aliens and end up dead.  Some characters’ personalities do develop through each Gantz game and I wanted to see Kurono, Kato, Kei, and some of the contestants willing to team up with Kurono, survive the Gantz games and return to a normal life.  Gantz also does a good job of making some really despicable characters and seeing those characters die permanently is sometimes amazing.

The anime unfortunately ends shortly with a chapter different from the manga and the manga still kept going and going and going.  I don’t have ADD but I do have an issue with long series (like Naruto, Bleach, majority of Shonen Jump, and almost everything from Rumiko Takahashi).  Gantz went from being a simple game for people to reclaim their normal lives, to fighting humans, to fighting vampires, to fighting aliens on another planet and parts of Earth being destroyed.  Of course there is nothing wrong with making a story bigger as it goes on but a few characters and plot points become lost or loose the impact the creator might have been going for in the process.  Sometimes I had to stop and think of who characters were that were introduced chapters ago, disappeared,  and later come back a hundred chapters later.  A few manga chapters have some obviously drawn out scenes.  For a few months, I did not read Gantz in hopes of seeing if the story moved along by the time I went back to read it.

Gantz may look like an anime or manga insistent on showing gore and nudity but it is a surprisingly deep series.  Unfortunately it may take some time to get to the last chapter of the manga due to Gantz’s long length (over 300 chapters) and deepening and plot that gets crazier and crazier as it goes on.  There are a bundle of characters who’s personalities are very diverse and work well with the main cast of characters.  Gantz anime and manga is worth a look and hopefully the manga ends soon.  Both the anime and manga is dirt cheap on amazon at least.
Posted by Unknown at 2:21 PM No comments:

Injustice Gods Among Us

I am not a comic fan; I’m an anime fan.  I’m also a anime fighting game fan.  So while DC comic fans were foaming at the mouth at the sight of their favorite superheroes being revealed on eachInjustice character reveal trailer, I remained indifferent about the game.  When I played the game on it’s release date at my local fighting game scene, I realized how  fun the gameplay was.
At first looking at the animations, button inputs, and the gameplay, I thought I was looking at Mortal Kombat 9 with stage hazards.  Thankfully the options to have alternate controls (think street fighter controls), some characters with the ability to air dash, and the stage interactions add a lot of variety to this game.

Being a fan of fighting games like BlazBlue, I felt comfortable with the fact that each character has a unique ability known as a traits.  With the press of a button, Aquaman could cover himself in water and slip out of ground combos, Wonder Woman can change combat modes, and Superman becomes more powerful.  Learning each character’s trait was fun and helpful.
The ability to display my combos and moves on screen and being able to see where the stage interactions are in training mode is nice.  There is a variety of options in training mode and the tutorial helped me get used to the game pretty quickly.
There is a ton of DC love here.  There are a lot of DC characters to choose from.  The story seems like a story straight out of a comic.  Like Mortal Kombat 9, Nether Realms does a nice job of writing a good story that is presented nicely in a fighting game. There are also mini games, where players could complete in order to win XP which helps players unlock bonus content in the game (concept art, character models, etc).

The costumes are what to be expected from comics, except some look weird (like Flash’s outfit).  Thankfully, there are a ton of dlc and outfits to unlock, in case players aren’t happy with the default outfits.  I would really love to see  Harley Quinn’s original outfit instead of the obvious fanservice outfits she has today.

RIP Harley’s original outfit. I liked it when she looked like a harlequin

There isn’t a way to show someone’s rank online.  Players can easily gain experience and level up through single player modes.  That one person with, a ton of XP, could have spent most of their time in single player mode before going online.  Of course winning a few ranked matches online, doesn’t always equal a highly skilled player.  The option to set rank matches according to a player’s current level or a higher level would have been nice.  The ability to mute players in player matches is wonderful!  No more babies and kids screaming into the mic for me!

I can skip characters’ intros but I can’t skip their outros?  The outros are long and, except for a one custom choice for the Green Lantern & Superman, there is only one outro for each character!  After the outro, I need to wait for the players’ XP to go up.  I found myself tapping my foot or finishing a text message while Black Adam electrocuted me for the hundredth time.

Despite not being into the source material, I found Injustice Gods Among Us to be a very fun game.  I hope this game lasts a long time in the fighting game community so I can see more tournaments and go to more tournaments for the game.  When I can’t find anybody I want to play against, I will have a lot of options in single player mode.  This game is worth the money.
Be sure to look at some of the great stuff from GameStop for Injustice here:  The Battle Edition,Collector’s Edition, and the Season’s Pass

Last week, I spoke about the wonders of shopping at other video places, besides GameStop when buying video games. Play-Asia.com is definently the website I go to when looking for new and interesting games that may or may not leave Japan.

On the front page, I found advertisement for a game called Soul Sacrifice.  Now I don’t have a PlayStation Vita yet (and I probably won't have one for a long while) but this game caught my attention.

Thankfully, this game has been out in the USA for a few days.  Judging by a majority of the reviews, this is not a bad game in the slightest.  Japan gets an awesome Soul Sacrifice edition of the PlayStation Vita.

I will be getting this game on my PlayStation 3 when it comes out.
There is no harm in buying from Play-Asia.com  Play-Asia.com is a safe website.  I have ordered from them in the past with the help of the trusted paypal.
Posted by Unknown at 6:51 PM No comments: